During each Antarctic summer I work for an American company, Quark Expeditions, which runs specialist tourist trips to Antarctica, as a lecturer, Zodiac driver and photographer. I am a member of a small expedition team.

In February 2009 I was on board the M/V Ocean Nova. This ship was built in 1992 to sail the ice-choked waters of Greenland. The Ocean Nova's ice-strengthened hull is excellent for Quark’s polar expeditions and has enabled the ship to park in the ice of the Weddell Sea. The ship has been part of the Quark fleet since 2006.

We sailed from Ushuaia, Argentina, the most southerly city in the world.

So on my second expedition of this season we went further into Antarctica than I have ever been before, south of the Antarctic Circle. On board were 65 passengers, 30 crew and 11 expedition staff, including myself.

I was in charge of a fleet of seven Zodiacs and also lectured and supported passengers in photography.

The trip was going very well. We had made excellent landings and for the first time in my life I camped as one of two staff with twenty passengers on mainland Antarctica. A truly unforgettable experience.

However this was to be followed by an equally memorable experience, which I now record as a diary of events.

The “Ocean Nova” anchored in Marguerite Bay, on the Antarctic Peninsula and south of the Antarctic Circle. The weather was fine. A Zodiac landing of passengers was made in the afternoon at Stonington Island, where there is an ex British Antarctic Survey base (base “E”) and an adjacent American base, also abandoned. There was no sign of bad weather to come.

An evening visit was made to the Argentinian St Martin Base, located on Barry, a small island in the bay, and part of the Debenham Islands. The Base lies at 68 degrees 7 minutes south, 67 degrees 8 minutes east. We were made most welcome by the station staff and scientists. The evening was clear, cold and sunny.

I was woken up around 1.30 am by the Captain announcing over the tannoy that our ship, the “Ocean Nova” was aground but that we were all safe. He added we were trying and would continue to try to extricate ourselves. 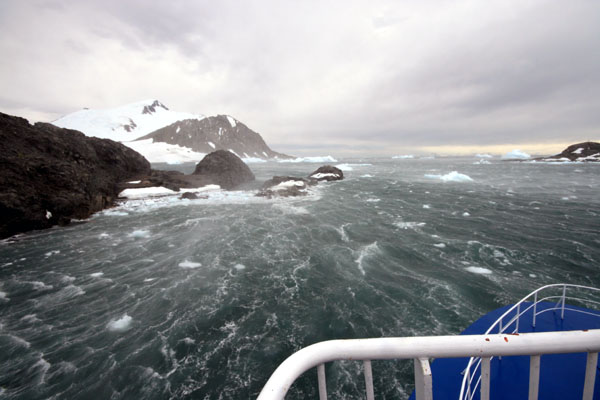 How did this happen?

Very strong winds blew the ship aground on the edge of a small unnamed island within sight of St Martin Base.

The ship was resting, driven by strong onshore winds on a rock slope running underwater from the island, but grounded on a rock towards the stern. This later turned out to be under my cabin, on the lowest and crew accommodation deck, literally feet away. 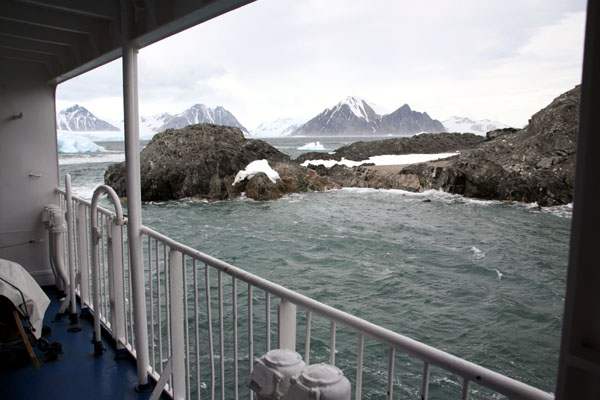 Strong winds continued .The ship was unable to pull itself off using its own engines, including the bow thrusters. The Captain sent out an International distress signal.

Several unsuccessful attempts were made during the day to get the ship off the rocks.

Unlike many other sea areas in the world where there is much shipping movement, the Antarctic is very isolated. The nearest ship was over half a day away and the next nearest around 16 hours away.

The Spanish survey vessel “Hesperides” arrived in the afternoon to help, having been the nearest ship and responding to our distress signal. The ship initially stood off since the winds were too strong (50 knots) for it to anchor. 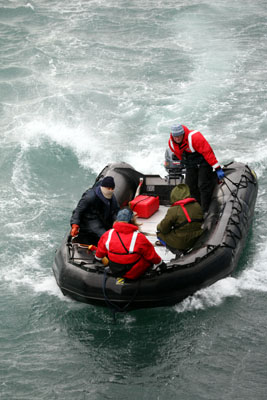 The wind later reduced to 20 – 25 knots. A Zodiac was launched from “Ocean Nova” to take depth soundings by weighted line around the ship. This was to determine the underwater rock configuration and depths. Before completing the task the Zodiac had to return due to (katabatic) winds suddenly strengthening to over 60 knots, nearly twice the safety limit for Zodiac operation.

Attempts were made during the night at high tide to remove ship from rocks. This was initially successful but strong winds (70 knots) and limited room to manoeuvre resulted in the ship running aground again a little further into the bay.

This time the ship was grounded on rocks under her bow. At daybreak the ship was listing 9 degrees to port. There was water in the staff office on deck two and the water in my shower next door, cabin 204, would not drain away.
Several cabins on deck three also had water in them. 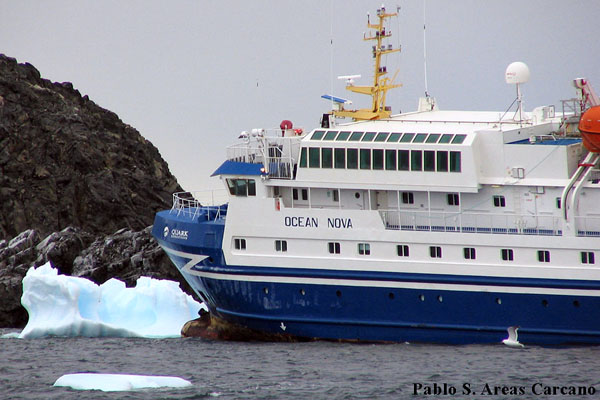 The angle of list increased as the tide fell. 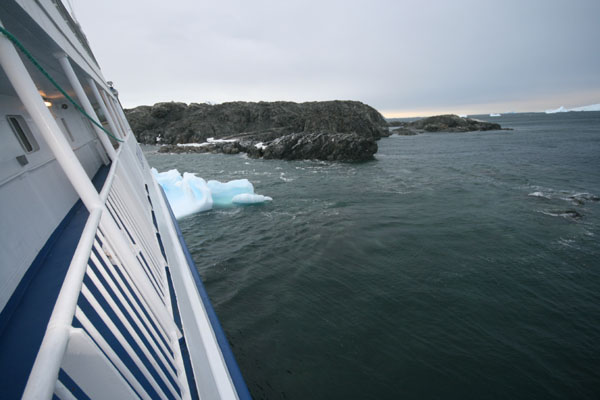 The “Clipper Adventurer”, another Quark ship, arrived later in the day. It had been urgently diverted south from its expedition to help and was the second nearest ship to us when our distress signal went out.

Divers from the “Hesperides” examined the hull and took a video of what subsequently transpired was damage.

By early afternoon the winds had reduced sufficiently to evacuate all passengers and luggage, plus three expedition staff to the “Clipper Adventurer”. 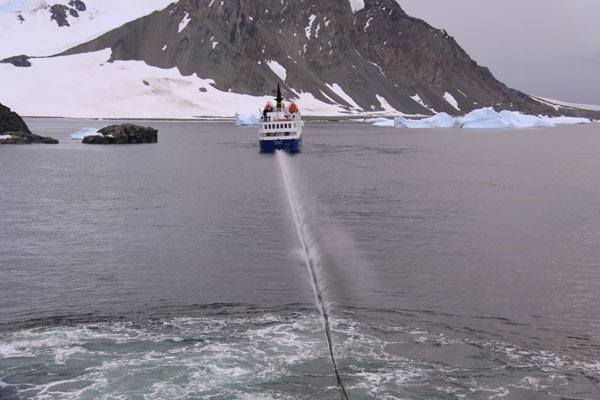 In the evening a long line was attached from the “Clipper Adventurer” to the “Ocean Nova”. With the help of the engines of both ships the “Ocean Nova” was towed off the rocks.

The “Clipper Adventurer” and “Ocean Nova” proceeded north together on the 1,000 mile journey back to Ushuaia, Argentina, across the Drake Passage in the Southern Ocean.

For much of the way the two ships were joined by an Argentinian warship, for safety and help if required, and regular survey by Argentine navy aircraft.

The arrival in Ushuaia was in the middle of the day.

It was subsequently discovered that the hull had been damaged.

All passengers, expedition staff and crew were safely returned.

The “Ocean Nova” did not proceed with its next voyage. Repair work started. The investigation continued.

I have recorded the above as a personal and factual diary. It is not in any way a Quark Expeditions account or one from any other organisation or individual involved directly or indirectly with Quark.

It would also be possible to write a story which included the actions and emotions of those involved. That is for another time and perhaps another author.

I believe the expedition team throughout events behaved with sensitivity, courage and true professionalism in supporting, informing and looking after the passengers.